On Reading the Recent Census Data

The Jamaica Plain Gazette, which covers news in the area I call home, recently published an article about the most recent census data in our area. It turns out that my neighborhood is now sixty percent people of color, with a three percent increase in the number of Hispanic residents. To celebrate this, and the work of the census (the only governmental agency I'm really happy with), I've decided to give you a free personal essay. Read on, friends from all over!

You, Bitch!
When I was a little kid I used to pretend I was a tree. I grew up in a rural area and I would go out behind my house to a stand of maples or oaks or whatever they were, and spread my arms above my head and stand still, pretending I was a tree, for as long as possible. After my adult neighbor caught me at this and asked, awkwardly, "are you okay?" I only struck poses when I was pretending I was Madonna. But every girl at that time pretended that.

Now sometimes, when I ride the subway, I pretend that I am black.

The other day I was on the Orange Line, sitting between two men. The train was not overly crowded. The man on my right was a black man in his thirties wearing a red track suit and eating a Whopper. The man on my left was in his late fifties or early sixties, also black, wearing a porkpie hat, and swaying. He was drinking a nip of vodka and holding a cane loosely in his left hand. I thought: I cannot wait until I am old and drunk on the train.

I am a young, white woman and was sitting between them listening to headphones and staring aimlessly in front of me. Other thoughts I am sometimes preoccupied with when I ride this particular subway line to the end and have the time to think include some about a passage from Jamaica Kincaid's novel Lucy, which I read when I first moved to Boston. In that novel, the character Lucy too has just arrived in Boston, leaving family and friends and culture behind for this new, cold city. In one passage, Lucy is on the subway and she thinks that the other, white passengers on the train always hesitate before taking the seat next to her. That if there is another seat available anywhere on the train they will always sit there. I always wonder, in a vague way, if the same is true on this particular line, in this most segregated city, in reverse. And how different the causes and context of that same action could be. The other thought I have, involuntarily and on a sort of loop, when riding the train, is of a sermon I heard preached in my first month in my new apartment here. The minister described her attitude on the train this way: she said that she only ever took the same line to the same destinations for about six months. Her existence, she said, could be described in the shape of a barbell. And when she was on the train she would take her purse and put it on her lap because she was afraid it would be stolen. She was afraid of everyone and everything in public places in the city, since she had never before encountered so many strangers –so many unfamiliar people. Then I always think how stupid that is. I put my bag on my lap on the train too. Because if I didn’t it would probably be in someone else’s way. But I get the sentiment, I guess.

A white couple, probably in their thirties and both of them wearing dark pea coats, entered the car. The woman took the seat next to the drunken man on my left, and the white man stood, holding the pole, next to her. The man in the porkpie focused on them with some effort, and asked the guy if he wanted to sit next to his girlfriend. The guy looked from the man to his girlfriend and back and said no, that was fine, he would stand. The black man was obviously much older than the white, and the white guy was, I imagine, thinking of those little stickers asking passengers to please give up their seats for the elderly or disabled. But the older man wasn’t giving up, he insisted. There was a bit of back and forth that I could half-hear over the song playing in my earphones, which ended with his statement to the couple that he was sure they were getting off at Back Bay anyway. At this point, the other people in earshot started laughing. It is a well-known truism that most white folk on the Orange Line get off before too long. Those who ride to the end are invariably walking to leafy little neighborhoods off the main streets. This is changing rapidly, but has been the case for a long time. I started giggling. Because I am white too, and was not being made fun of. Because I have been on the train late at night, alone and feeling very far away from my own neighborhood. Because I have been messed with in public, and messed with other people. Because everybody hates a tourist. Because this guy was funny. Mostly I laughed because no one was looking at me and I was therefore free to do whatever I wanted.

Porkpie was right. The couple looked confused for several stops, then exited at Back Bay. Feeling encouraged by the earlier reaction, I think, he turned to me and said something. I knew he was talking to me but I didn’t hear what he said. I pulled one earphone off, turning to him, and asked, “what’s up?” He looked at me and said, “wassup? WHAT’S UP? YOU, BITCH. Yeah, that’s what’s up…”
I stared. The man on my right started laughing so hard that he explosively spit some of his Whopper accidentally on my bare leg, between my cuff and my shoe. A little fry bit followed close behind and landed on the floor in front of me. I wanted to cry. I wanted to scream. I wanted to get up and move away. I thought it wisest to laugh, but couldn’t quite do it. I turned up my music and stared resolutely in front of me for the rest of the ride, pretending I was deaf and foreign.

Maybe, I thought, as the three of us got off at the end of the line, this preoccupation with the Other doesn’t have to do with race. Or socio-economics. Or even geography. Maybe I am just doing what I have always done, what I suspect most of us do on a daily basis: I am pretending I am just like you.
at 1:02 PM 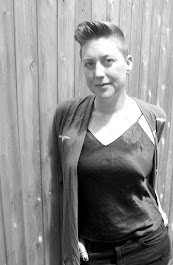